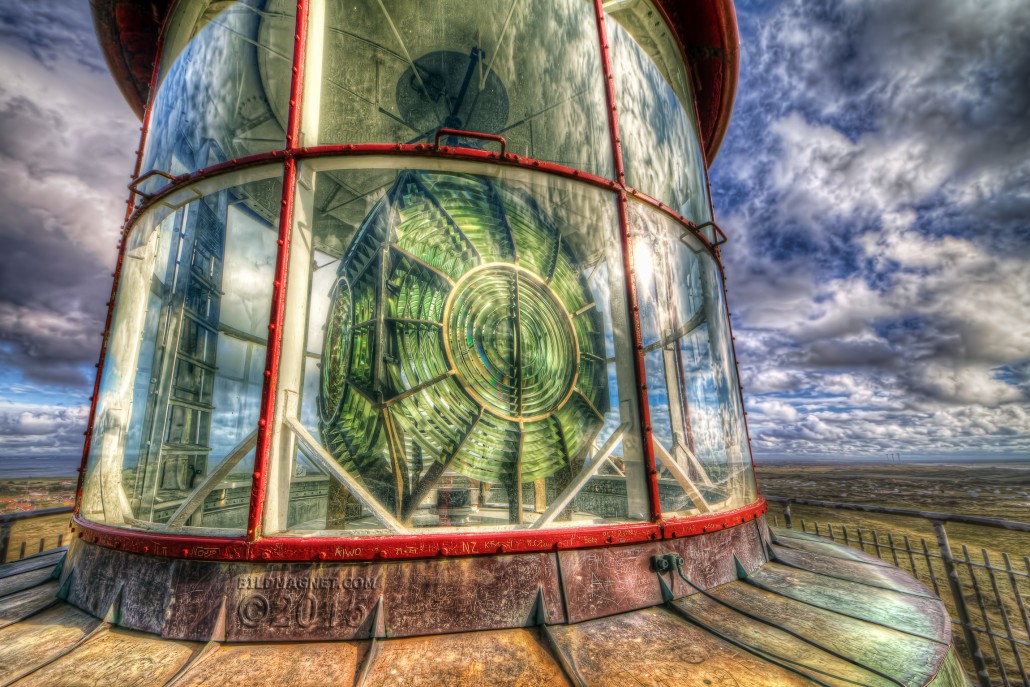 Lighthouse Fresnel lense,
we see the top glashouse from Lyngvig-Lighthouse.
A system of lenses and prisms – a combined Fresnel lens – condenses light
from the lighting assembly . Four of these lens systems are mounted on a grid of brass. The combine four constant light rays.
The whole system is rotating about a vertical axis. The total lantern floating on a ring-shaped vessel filled with mercury . Lanternen foot forming a lid on this vessel . This device provides an almost frictionless movement of the lantern .
In order to avoid evaporation must kerosene is poured over the mercury. The boiler personnel should
constantly pouring kerosene on .
Until the introduction of electric power , it was important that the lenses and prisms to be constantly plastered for
the brightness can be maintained out to the optimal distance to the sea .

Lyngvig Emergency lantern came at the World Exposition in St. Louis in the United States 1904. The designers of the lantern belonged to a French company : BARBIER , Benard & TURENNE . Already at that time had the lantern got its characteristic:
one flash every 5th second.
There must have been an international organization that planned and specific characteristics of each guy in the waters around the world.
Only two years after the world exhibition was the lantern mounted on top of Lyngvig Lighthouse .

Similarly, fresnel lanterns of same and competing brands found in several places in the United States
and France. Local interest organizations working for the preservation of lanterns and lighthouses.

This shot was very difficult for me. The window glass, many window frames and the number of correction of the oblique perspective gave me a lot of work.