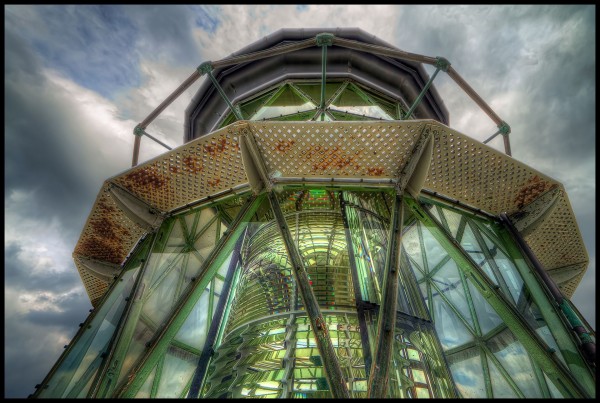 The lighthouse Hirtshals is located in Northern Jutland (Denmark)

A Fresnel lens is an optical lens, which was invented by Augustin-Jean Fresnel. Originally developed for lighthouses,

enables the design principle of the construction of large lenses with short focal length without the weight and volume of conventional lenses.
The reduction in volume occurs at the Fresnel lens by a division into annular regions.
In each area, the thickness is reduced, so that the lens is replaced by a series of annular steps. Since light is broken only at the surface of the lens, the refractive angle is not on the thickness, but only on the angle between the two surfaces of a lens. Therefore retains the lens in its optical properties, although the image quality is affected by the stepped structure.

The power of the light bulb in the lighthouse Hirtshals is only 400 watts!

This shot was very difficult for me. The window glass, many window frames and the number of correction of the oblique perspective gave me a lot of work.